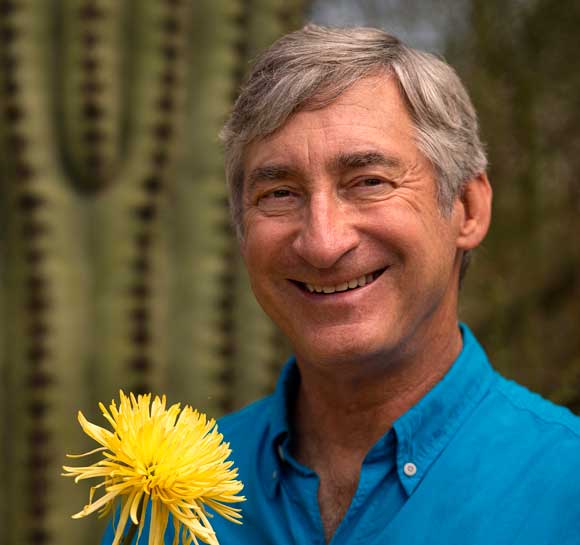 STEPHEN BUCHMANN, is a pollination ecologist specializing in bees, and an adjunct professor with the departments of Entomology and of Ecology and Evolutionary Biology at the University of Arizona.

A Fellow of the Linnean Society of London, he has published over 150 peer-reviewed scientific papers and eleven books, including The Forgotten Pollinators, with its prescient (1996) warning of global pollinator declines, a finalist for the Los Angeles Times Book Prize. He lives in the Sonoran Desert of Tucson, Arizona, with his life partner, estate planning attorney Kay Richter.

Buchmann is a frequent guest on many public media venues including NPR’s All Things Considered, and Science Friday. Reviews of his books have appeared in The New York Times, Wall Street Journal, Time and Discover magazines and other national publications. He is an engaging public speaker on topics of flowers, pollinators, and the natural world. His many awards include the IBPA Benjamin Franklin Award, and  an NSTA Outstanding Science Trade Book.

In his own words:

“I’ve always loved being outdoors feeling the wind and inhaling the alluring scents of nearby trees and flowers. Living in the Sonoran Desert of southern Arizona, I often walk along the washes and desert canyons near my Tucson home. Sitting outdoors on a boulder, I stop and slow my thoughts, taking in all of nature. Insects, including my favorites, the bees, zoom past uninterrupted in their search for floral rewards. Slowly, the larger animals reappear, as rabbits, ground squirrels and birds settle around me. Nearby, I spy a vivid yellow-orange Senna bush. It’s early morning and I hear the bees. They are buzz pollinating, having turned themselves into living tuning forks. They use sonic blasts from their thoracic muscles to harvest the floral pollen.

In nature I always find inspiration for my writing, and ideas for my scientific research. I’ve never kept a nature journal or sketchbook, but often capture images and memories with a digital camera. My backyard in Tucson’s north foothills provides inspiring views of the rugged Santa Catalina Mountains. I wrote much of The Reason for Flowers while immersed in the riotous yellow blooms of palo verde trees, like eastern Forsythias on steroids, and by the multi-armed giants, the white-flowered saguaro columnar cacti. Years ago, I did the same when co-writing The Forgotten Pollinators book while walking the grounds of the Arizona-Sonora Desert Museum, including time spent within the hummingbird aviary watching the small but feisty birds drinking from the many orange and red tubular flowers. I cherish every moment I can spend outdoors, whether those times are outdoors in arid desert lands, Ponderosa pine glades, or tropical forests around the world. Bees and their flowering food plants are usually nearby.”